Data gathered from 802 U.S. colleges and universities for the 2018 NACUBO-TIAA Study of Endowments (NTSE) show that participating institutions’ endowments returned an average of 8.2 percent (net of fees) for the 2018 fiscal year (July 1, 2017 June 30, 2018) compared with 12.2 percent for FY17. The decline in year-over-year performance for U.S. college and university endowments was largely driven by a decline in the U.S. and international equity markets. While the mission-critical 10-year average annual return increased by 1.2 percentage points this year to 5.8 percent, it still fell short of the 7.2 percent average return institutions report targeting as a long-term return objective.

Participating colleges and universities reported spending more than $21.6 billion from their endowments on campus operations, and, for the first time this year, the Study introduces new data that show how institutions allocated their endowment spending dollars. On average, schools used 49 percent of their total endowment withdrawals to support student scholarships and other financial aid programs, and 16 percent for academic tutoring and other related functions.

“The new endowment spending data from this year’s Study clearly demonstrate the deep commitment colleges and universities make to support financial aid and student success,” said NACUBO President and Chief Executive Officer Susan Whealler Johnston. “These data show that students and their families are the ultimate beneficiaries of institutions’ endowed funds. We remain concerned, however, about the below-target long-term rates of return, which have made it much more difficult for colleges and universities to increase endowment spending to support their missions.

“In spite of the long-term returns remaining below 6 percent, institutions continued to increase their endowment spending dollars. In FY18, 66 percent of NTSE-participating institutions reported raising their spending, and among those schools, the median increase was 6.6 percent, well above the rate of inflation (as measured by the Higher Education Price Index) of 2.8 percent.”

Endowments are playing a bigger role in institutions’ operations, funding an average of 10 percent of the operating budget in 2018,” said Kevin O’Leary, Chief Executive Officer of TIAA Endowment and Philanthropic Services. “Given the role endowments play to fulfill institutional missionsand their sensitivity to policy and management decisionsa more comprehensive approach to endowment management has become pivotal to the success of higher education institutions.

“The annual Study analyzes return data and a broad range of related information gathered from U.S. colleges and universities, both public and private, as well as their supporting foundations. The size and scope of the Study make it the most comprehensive annual report on the investment management and governance practices and policies of institutions of higher education institutions across the U.S.

The 802 institutions in this year’s Study represented $616.5 billion in endowment assets. While the size of the median endowment was approximately $140.2 million, 41 percent of Study participants had endowments that were $101 million or less.

The average asset allocation in FY18 of the institutional participants in the Study showed very little change from FY17. For the statistics representing all cohorts organized by total endowment market value, the major asset class categorizations of U.S. equities, non-U.S. equities, fixed income, short term securities/cash/other and alternative strategies were all virtually unchanged from the prior year’s survey results in the combined statistics.

Returns were lower in FY18 for the institutional participants in the Study compared with FY17 in four of the five primary asset class categories tracked in the Study, with only alternative strategies providing higher returns (8.3 percent in FY18, as compared to 7.8 in FY17).Larger institutions posted higher average returns than smaller institutions in FY18, in part because they had meaningfully higher allocations to alternative strategies, particularly private equity and venture capital.Non-U.S. equities, which produced last year’s highest return, 20.2 percent, fell to 6.8 percent in FY18, the largest decrease in percentage points year-over-year. U.S. equities returned 13.6 percent, a decrease from last year’s return of 17.6 percent. Short-term securities/cash/other returned 1.3 percent, just slightly less than last year’s 1.4 percent. 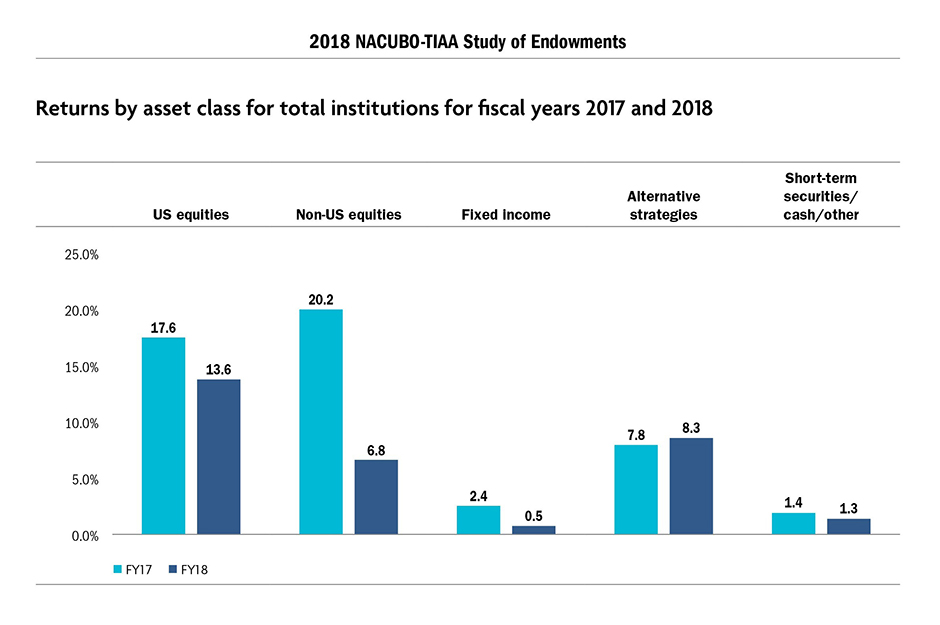 Institutions participating in the Study reported the same average effective spending rate as FY17 (4.4 percent). Comparing FY18 returns to spending for each respondent, 76 percent of respondents successfully grew the real value of their endowments in FY18. This is due to primarily positive market returns for FY18.

In a case combining mistaken identity, incredibly poor judgment and racial profiling, Las Vegas police are accused of “confusing” a 23-year-old Black man for a white man twice his age simply because they share a similar name. And now that wrongfully detained man is filing suit against the police department…

A residential neighborhood in Miami Beach, home to a large Jewish community, is under attack from an unknown racist bigot. Mychael Schnell of The Hill reported that “antisemitic fliers were left at hundreds of homes in Miami Beach overnight on Sunday, Jan. 23 [in] the latest incident against the Jewish…

A 23-year-old Black woman was found dead in her apartment following a date with a man she met on the dating app Bumble. Police in her hometown of Bridgeport, Connecticut, have been charged with racial insensitivity for failing to follow up properly on the case for nearly a month and…

An online gathering of Asian American women and their allies to talk about anti-Asian discrimination felt the damage firsthand when a racist internet troll attacked their meeting. Leah Asmelash of CNN reported that the “virtual gathering of high-profile Asian American creators, including actress Olivia Munn, became the subject of their…

The U.S. Postal System’s ongoing series of “Forever” stamps will soon honor Black Native sculptor Edmonia Lewis. The internationally acclaimed artist was a major figure in the 19th-century European art scene, and many of her marble art pieces are now housed in museums across the globe. Eric Levenson of CNN…

Following its recent agreement to hear testimony in a case that could abolish abortion rights protected in the historic 1973 Roe v. Wade decision, the U.S. Supreme Court has agreed to take on another case that could undo decades of legal precedent. The topic under fire in this latest case?…

People on the Move: Shawn Purvis, New President and CEO of QinetiQ US

Military and defense engineering company QinetiQ U.S. has announced the appointment of Shawn Purvis as its new President and CEO.  A current member of the Executive Leadership Team and Corporate Vice President at Northrop Grumman Corporation, Purvis currently heads that company’s Enterprise Services sector and is responsible for global cyber…

Even though the Florida Department of Education has already banned the classroom teaching of Critical Race Theory, lawmakers in the state are attempting to go even further, passing a law to protect whites’ “feelings” during education dealing with Black history.  Amy Simonson of CNN reported that a bill backed by…

Mitch McConnell Under Fire for Claiming Black Americans Are Not ‘Americans’

As the battle to protect voting rights continues in the nation’s capital — sadly with little success — veteran politician and minority leader of the U.S. Senate, Mitch McConnell, has come under fire for a statement he made that implied Black Americans were not “full” Americans. Bruce Schreiner of The…