Johnson & Johnson today announced it has committed to ensuring more than $500 million is dedicated to world class research & development and delivery programs over the next four years to accelerate global efforts to eliminate HIV and tuberculosis (TB) by 2030. As one of the world’s largest healthcare companies, Johnson & Johnson is deeply engaged in global health innovation, working closely with governments and strategic partners to improve the health and well-being of more people in more places around the world.

“No single institution can tackle the historic challenge of eliminating an infectious disease,” said Paul Stoffels, MD, Vice Chairman of the Executive Committee and Chief Scientific Officer at Johnson & Johnson. “By advancing our technologies, uniting our best scientists and leveraging decades of experience in HIV and TB, we’re optimistic that we can make a significant contribution to the global effort.”

Building on a strong track record set by its Janssen Pharmaceutical Companies in the areas of HIV and TB and Johnson & Johnson’s existing Health for Humanity 2020 Goals, Johnson & Johnson will dedicate a team of world-class researchers who will leverage our scientific resources to accelerate the discovery, development and delivery of next generation medicines and vaccines to complement investments being made by governments.

This investment in innovation has the potential to positively impact the day-to-day lives of millions of people affected by both HIV and TB and maximize the efficiency of country investments in health over the long-term. In doing so, these efforts will also support the achievement of the United Nations Sustainable Development Goal 3 targets when combined with other global programs. 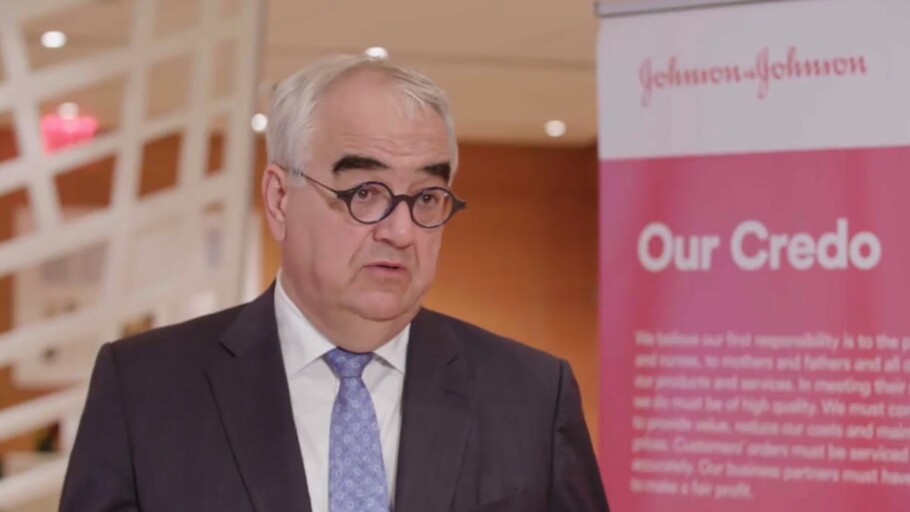 HIV
The Janssen Pharmaceutical Companies of Johnson & Johnson (Janssen) have been committed to the fight against HIV for more than 25 years. Over this time, the Company has introduced eight transformational HIV medicines – including three antiviral agents and five combination products developed in partnership – which have helped to transform HIV/AIDS from a death sentence into a chronic, manageable disease, allowing millions of people living with HIV to lead near normal lives.

“Although HIV is now considered a chronic and manageable condition, people living with HIV still face a lifetime of taking daily pills. We therefore must continue to advance important innovations to help them,” said Johan Van Hoof, MD, Global Therapeutic Area Head, Vaccines, and Managing Director, Janssen Vaccines & Prevention B.V., Janssen Pharmaceutica NV. “The global challenge remains immense. With 37 million people around the world living with HIV – and nearly two million people newly-infected each year – we cannot treat ourselves out of the HIV epidemic. Our ultimate goal must be to find a preventive vaccine for HIV.”

As part of the $500 million investment, Janssen will continue to advance an investigational mosaic-based vaccine regimen to prevent HIV together with a consortium of partners. An ongoing efficacy trial (Imbokodo) in 2,600 women in Southern Africa is fully enrolled. A second efficacy trial (Mosaico) is about to commence in North America, South America and Europe with 3,800 men who have sex with men and transgender individuals.

In partnership with ViiV Healthcare, Janssen is also investigating a long-acting injectable HIV treatment regimen that could be administered to patients once every two months. This regimen, if approved, could potentially reduce HIV treatment for some patients to just twelve or even six injection visits per year to keep the virus under control, instead of a daily oral treatment taken 365 times per year.

Tuberculosis
In 2012, Janssen introduced bedaquiline, which was the first TB medicine with a novel mechanism of action in nearly half a century. Since then, the Company has provided more than 145,000 courses of treatment for multidrug-resistant TB (MDR-TB) patients in 131 countries, including through a four-year donation program that operated in the 2015-2019 period in partnership with the U.S. Agency for International Development and JSC Pharmstandard.

At the United Nations High-Level Meeting on Tuberculosis in September 2018, Johnson & Johnson announced a comprehensive 10-year initiative to support ending the TB epidemic by 2030, which builds on our current Health for Humanity 2020 TB Goal. With the goal of saving an estimated 1.8 million lives and preventing 12 million new TB infections in the next decade, Johnson & Johnson is working with partners to improve detection of undiagnosed cases of TB, broaden access to bedaquiline, and accelerate research & development (R&D) to discover next-generation TB treatments.

“TB is the world’s number one infectious killer, and TB and MDR-TB cause major devastation for people, communities and entire countries around the world,” says Jaak Peeters, Global Head, Global Public Health, Johnson & Johnson. “The good news is TB is both preventable and treatable, and Johnson & Johnson is committed to doing everything we can to make TB history. With our 10-year initiative we want to unleash the power of science and technology to forever change the trajectory of this terrible disease.”

Visit www.jnj.com/outsmartepidemics for further details on the breadth of science and collaboration being undertaken by the Johnson & Johnson Family of Companies and its partners to tackle infectious diseases that are pandemics or that have pandemic potential. Annual reporting of progress in delivering Better Health for All can be found in our Health for Humanity Report, which includes details on progress for our Health for Humanity 2020 HIV and TB Goals and our UN Sustainable Development Goals: Global Disease Challenges commitment.

October continues to be a month Facebook likely wishes it could forget. First came Frances Haugen, the whistleblower who explained in chilling detail how the site and its algorithms are designed to profit off what she called “the spread and amplification of hate, misinformation and political unrest.” Then there was…

The fight against the concept of critical race theory and the “danger” it supposedly poses to American schools continues, this time with a new ACLU lawsuit against the state of Oklahoma. CNN’s Madeline Holcombe has reported that “a group of students and educators have filed a complaint challenging an Oklahoma…

In a history-making show of diversity and inclusion, Dr. Rachel Levine has become the first openly transgender four-star officer to earn a position in one of the nation’s eight uniformed services. As we reported back in March 2021, Dr. Levine was also the first openly trans person to be confirmed…

Originally published at ey.com. EY is a DiversityInc Hall of Fame company.   On Oct. 14, Ernst & Young released the 2021 EY Empathy in Business Survey, tracking how empathy affects leaders, employees and innovation in the workplace. The survey of more than 1,000 Americans who are employed reveals that…

In a truly shocking display, a woman in Philadelphia was recently raped on a train filled with commuters — and nobody did anything to stop the attack. Claudia Lauer of the Associated Press reported that “a man charged with raping a woman on a commuter train just outside of Philadelphia…

Regardless of which party is in power at any given time, people of color continue to be woefully underrepresented in not just elected office but also within support roles working for those lawmakers. And now, hundreds of these staffers are speaking out about what they call an “appalling” lack of…

President Thomas Jefferson remains a controversial historical figure for a number of reasons, including his dark past as a slave owner. And now, officials in New York City have decided to remove a high-profile statue of the founding father from the place it has stood for more than 100 years….

Originally published on LinkedIn. Cox Communications ranked No. 32 on The DiversityInc Top 50 Companies for Diversity list in 2021.   Hispanic Heritage Month festivities continue at Cox, and we love hearing employees’ stories and perspectives during this time of celebration. Here, some of Cox’s Hispanic and Latinx employees make…

In not necessarily surprising but still disturbing news, a new study from the University of Virginia reveals that locations with a greater number of Confederate monuments tended to have a more extensive history of public lynchings of Black men and women. Kynala Phillips of NBC News reported that the study,…

One of the co-founders of the #AppleToo movement, which alleges ongoing racism, sexism and discrimination within the tech leader, has been fired by the company. CNN’s Rishi Iyengar reported that Janneke Parrish, a former program manager at Apple, was suspended late last week and later terminated. Parrish told CNN that…

Get the top stories newsletter delivered straight to your inbox