Johnson & Johnson: Caring for Care Providers: An Innovative Way to Help Address the Growing Crisis of Doctor and Nurse Burnout

Up to 70% of nurses and nearly 55% of physicians report symptoms of burnout, which costs workplaces millions of dollars a year due to lost productivity and employee turnover and absenteeism—and impacts patient quality of care. But the CareAdvantage program is poised to help.

By Kristen Mascia
Originally Published by Johnson & Johnson.
It’s been 13 years since Barbara Trattler last worked in a hospital, but she can still feel the stress of that job in her bones.

As a head surgical nurse and perioperative administrator for more than two decades, Trattler performed the operating room equivalent of air traffic control, managing schedules and staffing—duties that often followed her home, well after a long 10- to 12-hour workday.

“I’d get calls at 4 o’clock in the morning from the hospital saying there weren’t enough patient beds post-surgery,” she remembers. “You had to be ready to get up and go at any moment.”

Trattler “loved every minute of the job,” she says. But it took a toll—she saw her family too little, rarely exercised, slept poorly and suffered from stress-induced migraines.

“I don’t know how I did it for so long,” admits Trattler, who left her last nursing position in 2006 to join Johnson & Johnson and is currently the Neuroscience Medical Affairs Director, Learning and Development, Janssen Scientific Affairs. “I’m a completely different person now.” 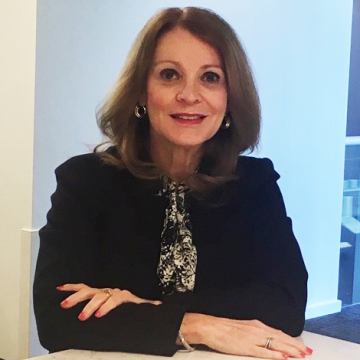 54: Percentage of physicians who say they suffer from burnout

Trattler’s story isn’t unusual: Up to 70% of nurses and 54% of physicians report symptoms of burnout, which costs workplaces millions of dollars a year due to lost productivity and employee turnover and absenteeism, among other factors. In fact, of all the challenges facing American health systems today, employee burnout is among the most urgent.

Helping those systems tackle difficult problems is exactly why, in 2017, CareAdvantage was launched.

Whether a hospital wants to improve its operational efficiency or find ways to target infections, CareAdvantage, from the Johnson & Johnson family of companies, is an approach that brings in the right Johnson & Johnson experts—ranging from health economists to scientists and clinicians—to help health systems identify their needs, and design a plan to address those needs in a measurable way.

“We hear over and over from customers how unique this program is,” says Melinda Thiel, Vice President, Customer Marketing and Solutions, Johnson & Johnson Medical Devices Companies (JJMDC). “While other companies may offer healthcare solutions, no one else has the breadth of offerings that Johnson & Johnson does, especially when it comes to consumer insights and understanding patients.”

This spring, Thiel and her team are debuting the latest CareAdvantage offering: Healthy Workforce. It’s designed to help combat caregiver burnout by giving healthcare professionals access to some of the very strategies that Johnson & Johnson leverages to help keep its own workforce healthy, including stress and energy management courses taught by the Johnson & Johnson Human Performance Institute® (HPI).

And that’s just one way CareAdvantage hopes to make a positive impact on healthcare systems around the world—positive outcomes like these recent case studies show.

Helping Hip Fracture Patients Get Back on Their Feet
Anyone who’s cared for an older parent knows the importance of getting swift care when Mom or Dad slips and cracks a hip—such fractures can be especially dangerous since many older patients have other health problems, like diabetes, chronic obstructive pulmonary disease (COPD) and obesity, that can complicate their recovery.

“The fracture can be the incident that exacerbates the other things the person is dealing with, which is why you want to fix it as fast as possible,” explains Nate Albright, vice president, clinical service lines for University of Maryland Upper Chesapeake Health (UM UCH), a regional health system with two acute hospitals that’s part of the University of Maryland Medical System.

In 2016, the UM UCH Orthopaedics Department began evaluating patient outcomes for acute hip fractures cared for in the UM UCH system. It learned that the one-year all-cause mortality rate for hip fracture patients hovered around 24%. That’s when Albright and William Cook, M.D., division head of orthopaedic surgery at UM UCH, started to examine the amount of time these patients had to wait to go into surgery, and be discharged from the hospital—and saw room for improvement. They believed they could change that mortality statistic. They just weren’t sure how to get from point A to point B. 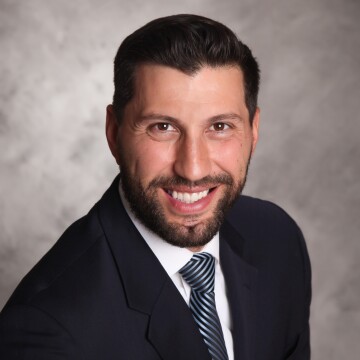 One key contribution, Albright says, was the discussion JJMDC facilitated between the orthopedic surgeons and hospitalists (the institutional term for internal medicine doctors) who co-manage fracture patients’ care. That exchange gave rise to a new co-management agreement that defined, in concrete terms, each team’s roles and responsibilities, smoothed out the patient admission process and made UM UCH’s acute hip fracture protocol more streamlined overall.

Patients with complicating medical conditions would now be assigned to the hospitalist service to manage their medications, for instance, for efficiency’s sake. “This way our nurses knew to call the hospitalists, not the surgeons, in the middle of the night if a patient’s blood pressure went through the roof,” Albright says.

With help from CareAdvantage, UM UCH also learned that surgery patients were sometimes kept waiting—at times for hours—for clearance from a cardiologist that wasn’t necessary in the first place. By applying new guidelines from the American College of Cardiology, the health system was able to amend the process so that patients who didn’t need cardiology clearance could be moved into surgery more quickly.

Most crucial of all, the CareAdvantage team helped UM UCH leadership make the case to hire a nurse navigator who could manage the fragility fracture program, close the communication loop between care providers and patients, and oversee patients’ postoperative care. “I strongly believe that having a dedicated resource for programs like these is critical for long-term success,” Albright says. “It helped that CareAdvantage was able to confirm that the programs that tend to do better have such resources.”

9: The percentage point drop in the all-cause mortality rate in hip fracture patients at University of Maryland Upper Chesapeake Health since partnering with CareAdvantage

In April 2017, UM UCH implemented the changes that came of their yearlong CareAdvantage engagement. Since then, Albright says, “we’ve drastically improved our ability to get patients out of the hospital and healthy again.” The all-cause mortality rate of acute hip fracture patients in the year after surgery now stands at 15%—about a 9% point drop from the rate prior to teaming up with CareAdvantage. “That means we’re saving about 18 lives a year,” Albright says.

Thanks to their efforts, UM UCH was recently recognized with a Circle of Honor Award from the Maryland Patient Safety Conference.

“To do this on our own would have been challenging,” Albright says. “CareAdvantage gave us access to experts who have done this before and could help us put our program in place.”

Empowering Patients Post-Surgery With an Easy-to-Use Connected Platform
While some CareAdvantage programs, like the hip fracture program, help address systemic challenges, others put tools designed to empower patients directly into their hands—tools like the Johnson & Johnson Health Partner program.

Created for people considering or having joint or bariatric surgeries, Johnson & Johnson Health Partner is a connected care platform that leverages behavior science techniques to help them identify—and actually adopt—the healthy actions needed to achieve better outcomes. It’s made up of three components: a website packed with articles and videos to help people prepare for their procedures; a mobile app where patients can enter data, such as reason for surgery, to receive advice geared toward their specific recovery needs; and a provider portal currently being piloted to help keep patients connected to their care team between in-office visits.

“Many hospitals struggle when it comes to engaging with their patients outside the four walls of the institution,” says James Demetriades, vice president of operations for Penn Medicine Princeton Health.

Michele Paul, 52, is one of the patients in that program. The former dancer had suffered from debilitating knee pain for years before undergoing a double knee replacement. In November 2017, as she was recuperating from her first surgery and preparing for the next, Paul downloaded the Johnson & Johnson Health Partner app.

While icing her knee after performing her daily rehabilitation exercises, Paul scanned articles and watched videos featuring patients “who were in the same situation I was,” she says. Their stories helped her stay motivated—as did setting reminders to prompt her each day to complete her exercises. “That was key,” she says. “I had the app pushing me along, making sure I was doing them when I said I would.” 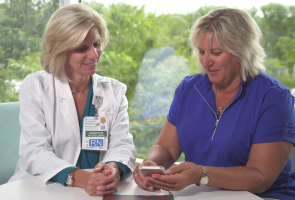 She could also message her care team through the app with questions or concerns, a feature she says was “invaluable, like having the nursing staff watching over you every day.”

“Whether you’re talking to our surgeons, our home care staff or our physical therapists, in outpatient centers or in the field,” Demetriades says, “they feel that this has been a critical platform to really help motivate our patients.”

Fostering a Healthier Workplace for the People Who Do the Caring
As Barbara Trattler can attest, tending to the ill involves an enormous amount of responsibility—and stress. So perhaps it’s no surprise that burnout is a profound problem across the healthcare landscape. More than half of American physicians experience it, according to the Mayo Clinic, suffering from such symptoms as emotional exhaustion and the sense that their work no longer holds meaning.

At its worst, burnout can lead to depression and suicidal ideation: A 10-year literature review presented at the American Psychiatric Association annual meeting last year found that the rate of suicide among doctors in the U.S. is more than double that of the general population. Most hospital environments aren’t equipped to properly care for the people doing the caregiving, says Trattler, who lost two colleagues, both anesthesiologists, to suicide.

“There’s this expectation that you’re tough, that you can work multiple shifts upon multiple shifts and sustain that for a long time,” she says. “I don’t think people realize what it does to them, physically and mentally.”

And doctors’ and nurses’ fatigue can influence the care patients ultimately receive, she notes. “People may call in sick, which means there may not be enough staff for patients to be treated as efficiently,” she says. “Or folks who are tired may skip a step or miss something.”

Now, Thiel and her team are hoping to change that through Healthy Workforce.

As with other CareAdvantage offerings, a Healthy Workforce engagement is designed to pinpoint a health system’s distinct needs and priorities. From there, the solutions could include performance and resilience training; communications skills coaching; and guidance on how to implement a strong culture of workplace health, from increasing employee engagement to prioritizing the retention of top talent.

“We’re excited to be able to offer our partners access to the same science-supported, evidence-based tools we use to help our employees,” Thiel says.

They’re tools Trattler wishes she’d had when she was a nurse.

“When I look back at the stress people were dealing with, I regret not having resources to draw from,” she says. “Burnout is a reality, and companies need to do something about it.”