Originally published on jnj.com. Johnson & Johnson is a DiversityInc Hall of Fame company.

Question: What do COVID-19 and heart disease have in common?

B) Black people are more likely to die from both diseases

C) Underlying heart conditions, which are more likely to afflict Black people than other populations, can be linked to the most severe cases of COVID-19

D) All of the above

If you answered D, you are, unfortunately, correct.

In December 2020, COVID-19 assumed the dubious honor of becoming the leading cause of death in the United States, bumping the previous longtime front runner, heart disease, to the #2 spot on the list.

Nationwide, COVID-19 has killed Black people at twice the rate of their white counterparts. And the persistent inequities in healthcare that have long predisposed Black communities to cardiovascular health problems are largely to blame for that higher fatality rate: Data show that the vast majority of serious COVID-19 cases involve such underlying health conditions as high blood pressure, cardiovascular disease and diabetes, which tend to affect Black and brown Americans more often, and at younger ages.

“The African American community, in general, has the highest prevalence of cardiovascular diseases,” says Rachel Bond, M.D., System Director of the Women’s Heart Health Program for Dignity Health in Arizona. “The community also has the lowest rates of the ideal components of health, including blood pressure control, not smoking, eating a healthy diet and exercising at least 150 minutes per week.”

Such statistics, many experts agree, are driven by what’s called the “social determinants” of health, or the conditions in which people are born, live and age. Research shows that longstanding systemic disadvantages—including discrimination and unequal access to healthcare—can be linked to severe health disparities.

To drive necessary change, Johnson & Johnson launched a Race to Health Equity initiative in 2020, focused on helping eliminate health disparities for people of color in the U.S. Through the initiative, the company is investing $100 million over the next five years to support healthcare programs aimed at underserved communities, as well as partnerships that address social determinants of health.

In honor of American Heart Month, we’re taking a look at three eye-opening heart disease statistics and what Johnson & Johnson is doing to help address them.

1. Black people with atrial fibrillation are 1/3 as likely to be aware that they have the condition as white people. 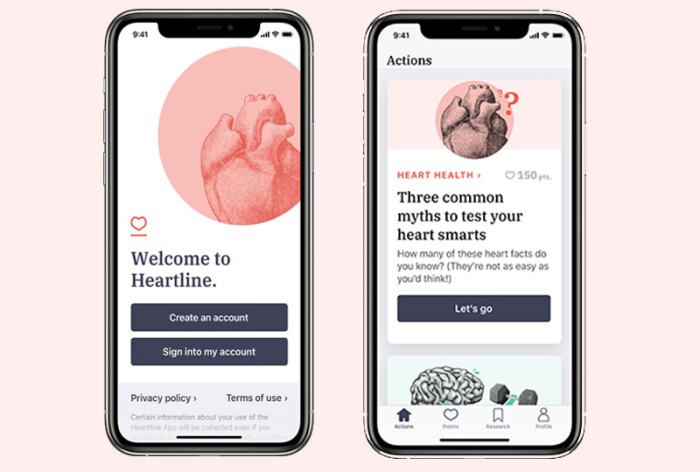 Atrial fibrillation (AFib) is a type of irregular heart rhythm that occurs when the heart’s upper and lower chambers do not beat in sync. As a result, blood clots can develop in the heart and travel to the brain, making AFib one of the most common causes of stroke. The disease is also often asymptomatic, making it hard for patients to get diagnosed and treated—especially Black people, who, research shows, are less likely to know they have it.

According to Charles Athill, M.D., Executive Director of the San Diego Cardiac Center and Chief of Electrophysiology at Sharp Memorial Hospital in San Diego, that fact can largely be traced to a lack of affordable care provided by a physician.

If patients are uninsured or have intermittent access to healthcare, he explains, it can be hard for them to develop long-term relationships with a doctor or receive proper monitoring for conditions that can increase the risk for AFib, like hypertension and diabetes. And even if patients do get a diagnosis, he adds, “without a doctor they can trust, it can be hard to accept that they have a diagnosis that needs to be treated, especially when the effects are silent for a while.”

Enter the Heartline Study, which was launched in 2020 by the Janssen Pharmaceuticals of Johnson & Johnson, in collaboration with Apple.

The Heartline Study plans to help democratize research participation by allowing volunteers to take part virtually, and is collaborating with the Association of Black Cardiologists to help recruit diverse participants.

The study aims to determine whether an app-based heart health engagement program, used in combination with Apple Watch’s irregular rhythm notification and electrocardiogram (ECG) app, can enable the earlier detection of AFib, and potentially improve heart health outcomes. In particular, Heartline will help provide data about how often patients might opt not to seek further care, even if they receive an alert that they could be at risk of AFib. This will allow experts to develop new ways to help patients get treated sooner.

The Heartline Study also plans to help democratize research participation by allowing volunteers to take part virtually, and is working with the Association of Black Cardiologists to help recruit diverse participants.

“We know that not everyone who takes a medication responds in the same way, and what may be efficacious for one patient may not necessarily work for another. Therefore, one way to ensure effectiveness for all populations is to make sure an ethnically and racially diverse group of people are enrolled in clinical studies, so the trials, as closely as is possible, mirror the real population of people who will ultimately use the medicine or product,” says Paul Burton, M.D., Ph.D., Chief Global Medical Affairs Officer, Janssen Pharmaceutical Companies of Johnson & Johnson. “We hope virtual clinical trials can help make them more inclusive, faster and more cost-effective, so we can deliver innovative healthcare solutions faster to those who need them.” 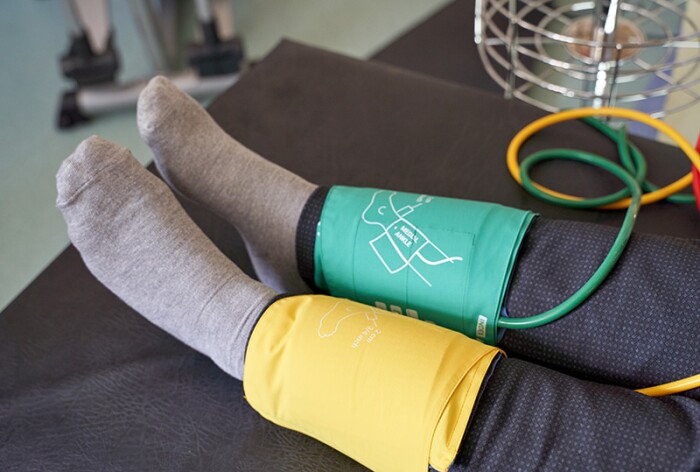 Peripheral arterial disease (PAD) affects an estimated 20 million Americans. The condition, in which the vessels that supply blood to the limbs become narrowed, can lead to the formation of blood clots and blockages that can increase your risk for heart attack and stroke.

“Black populations, particularly Black women, tend to present with asymptomatic or atypical symptoms of PAD,” which can include leg pain while at rest, says Dr. Bond, adding that this can make it harder to diagnose the disease early on.

As a result, PAD is on the rise in women around the world—especially Black women—despite the fact that the global death rate from cardiovascular diseases overall, including PAD, is on the decline.

Another potential cause of underdiagnosis of PAD in the Black community: The standard diagnostic test for PAD, the Ankle Brachial Index (ABI), which compares blood pressure in the upper and lower limbs, is not consistently covered under Medicare.

That said, Dr. Bond notes that “there are still very basic screening tools that we can use, like examining a patient’s feet, based on who we know is at risk.” Such simple tools can be crucial in preventing the progression of PAD, which is especially key for Black people, who are two to four times more likely than white people to require an amputation after being diagnosed with PAD.

We’re committed to reducing health inequities in PAD by collaborating with communities to help educate patients, partnering with healthcare professionals to improve standards of care, and working to form alliances to break down barriers to access. PAD care and outcomes should not be dictated by socioeconomic status, race or zip code.

“We clearly need to do a better job of taking diagnosis a step further for Black Americans, so we don’t get to a point where we have to do an amputation,” Dr. Bond says.

To that end, the Janssen Pharmaceutical Companies of Johnson & Johnson are working on solutions to better educate physicians and potential high-risk patients about PAD and its disproportionate impact on Black people.

Last year, for instance, Janssen sponsored a PAD Resource Toolkit for Providers for the Preventative Cardiovascular Nurses Association to help nurses improve their skills at identifying signs and symptoms of PAD and treating patients.

This year, Janssen is also partnering with Balm in Gilead—whose mission includes improving the health status of people of African descent—to sponsor educational content and webinars aimed at raising PAD awareness. In April, Janssen is also sponsoring the American Heart Association’s PAD Summit, which is focused on developing a National PAD Action Plan to improve public understanding of PAD and provide enhanced programs for the detection and treatment of PAD patients, among many other goals.

“We’re committed to reducing health inequities in PAD by collaborating with communities to help educate patients about their risks, partnering with healthcare professionals to improve standards of care, and working to form collaborative alliances to break down barriers to access,” says Reshema Kemps-Polanco, President, Cardiovascular & Metabolism, Janssen Pharmaceutical Companies of Johnson & Johnson. “PAD care and outcomes should not be dictated by an individual’s socioeconomic status, race or zip code.”

3. Black adults are up to two times more likely to develop high blood pressure by age 55—and less likely to have it under control—compared to white adults.

Uncontrolled hypertension is one of the biggest contributing risk factors for AFib and PAD, plus it raises people’s risk for a host of other conditions, including heart attack, stroke, aneurysms and even dementia.

Hypertension (a.k.a. high blood pressure) affects more than 100 million Americans, and yet it rarely produces symptoms, so getting diagnosed requires that patients know they’re at risk and regularly get screened at a doctor’s office.

“Healthcare access is a pretty important point here,” says Evren Atillasoy, M.D., Senior Director, North America Medical Affairs, Johnson & Johnson Consumer Health. People with poor social determinants of health may not receive insurance or prescription coverage, he says, or they may not know what questions to ask or how to navigate the healthcare system. “I think there’s an important need for consistent care that’s equitable across populations that looks at the person in a holistic way and addresses their needs,” he adds.

Last year, Tylenol® sponsored a free mobile health screening event in St. Louis, providing educational content about hypertension and blood pressure monitors. And to help drive greater awareness of high blood pressure and how it impacts health in Black communities, Tylenol also partnered with the National Urban League (NUL), a 110-year-old civil rights organization that advocates for African Americans, to provide content and blood pressure monitors in Baltimore; Broward County, Florida; Houston and New York City, all home to local NUL affiliates. The goal: help residents better track and manage their health from home. That collaboration will continue on through 2021.

“The historical legacy of structural racism is woven into these disparities,” Dr. Bond says. “If we don’t address that, we won’t see the changes that we need to see.”