Have Questions About Participating in a COVID-19 Vaccine Clinical Trial? A Doctor Overseeing a Study Helps Answer Them

Njira Lugogo, M.D., is a pulmonologist at the University of Michigan who is leading a clinical study of an investigational COVID-19 vaccine candidate. She helps answer common questions people may have about the process — from what people over 60 years old need to know to how participants are being kept safe during the pandemic.

As the COVID-19 pandemic stretches on, so do efforts to find a safe and effective novel coronavirus vaccine.

Johnson & Johnson is one of many companies hard at work on an investigational COVID-19 vaccine candidate, which includes recruiting up to 60,000 adult participants 18 and older and of all genders and racial and ethnic groups around the world for a Phase 3 clinical trial known as ENSEMBLE.

Pulmonologist Njira Lugogo, M.D., is the principal investigator of a clinical study site at the University of Michigan, where she’s the Medical Director of the Clinical Research Unit. She recently took time out of her busy schedule to share what it’s like to be on the front lines of this historic vaccine work—and to help answer common questions people may have about participating in a clinical trial.

Can you explain what your role as a principal investigator for a clinical trial entails?

A: I’m responsible for the oversight of the trial. This includes making sure everyone who works on the trial is knowledgeable about how to comply with its procedures and protocol. We need to follow all the participants closely, so if any safety issues arise, we can identify them quickly.

Your day job is as a physician. How did you become involved with overseeing the clinical trial site at the University of Michigan?

A: I’m a pulmonologist, which means most of my patients have existing lung disease, such as severe asthma. When the COVID-19 pandemic began, I was very concerned for them and also felt a bit helpless—I wasn’t sure exactly what I could do.

I realized the best way to overcome this emotion was to participate in a clinical trial. Since I’m the Medical Director of the Clinical Research Unit at the University of Michigan, it seemed very natural to become part of this clinical study as a principal investigator.

What are some of the most common questions you hear from potential participants?

A: Hands down, people want to know if the investigational vaccine is safe.

What we explain is that, while COVID-19 clinical trials are moving quickly, we’re following all the safety protocols put in place by both our university review board and the U.S. Food and Drug Administration (FDA).

The reason why research in vaccine development for the novel coronavirus has moved so fast is because so many groups—pharmaceutical companies, the federal government, research institutions—have come together in an unprecedented way to enable trials to push forward at a rapid pace.

People also want to know if they’re guaranteed to get the vaccine if they participate in the trial. The answer is unfortunately no, as all studies have a placebo arm to help us determine whether the investigational vaccine is safe and effective.

Which brings us to the next question I often get: If a vaccine is shown to be safe and effective, will participants be able to access it quickly? Most likely yes, because if the vaccine gets FDA approval, the company producing it will likely be able to unblind the study and make sure all the participants can get it.

What are the criteria for a safe vaccine?

A: It’s important to remember that any vaccine has some associated risks. Side effects are typically minor. For example, a sore, red arm; a slight fever; body aches or a headache. These are all part of the expected immune response that goes with vaccination.

But we also want to keep an eye out for certain things that are unexpected, such as a high fever. That’s why, in this trial, we follow participants post-vaccine for up to two years. We see them more frequently at the beginning, especially in those first 30 days after injection. We’re checking people’s antibodies to see if they go up, and for how long, in order to better understand if they are protected against COVID-19. 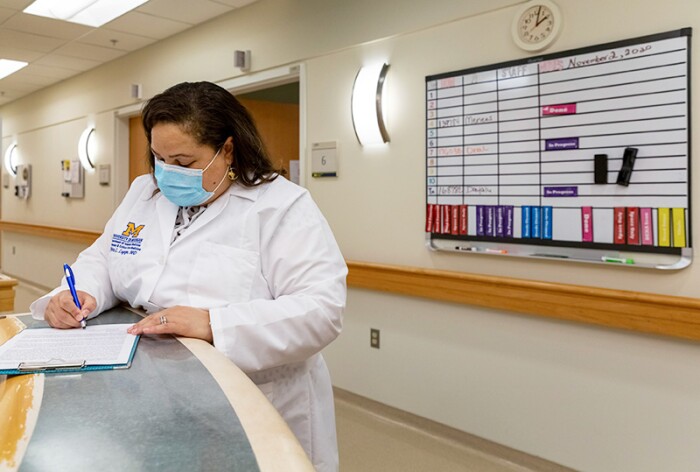 If any unusual symptoms or illnesses arise, we track them carefully. Sometimes they have no relation to the vaccine at all, but that’s why you need tens of thousands of people to participate and to be monitored to evaluate for safety. Even after an investigational vaccine is FDA-approved, it’s still continuously monitored by groups like the FDA and the Centers for Disease Control and Prevention (CDC).

What do people need to consider before signing up to be a participant in a clinical trial?

A: Honestly, if you’re at all interested, I’d encourage you to volunteer. The clinical study team will screen you carefully to determine if you’re eligible.

If for some reason you can’t participate now—for example, you have a medical condition that makes you ineligible—you may be able to participate down the road, as trials get further along.

Is the investigational coronavirus vaccine being tested on diverse groups of people?

A: Yes, it is, because there may be differences in responses to the vaccine based on age, gender and ethnicity. There’s a disproportionate number of poor COVID-19 outcomes, for example, among members of minority groups, such as Black and Latinx populations. Men are also at higher risk of serious illness and dying than women, as are individuals over the age of 65.

Personally, once a vaccine is approved by the FDA, I want to be able to look all of my patients in the eye and assure them that the vaccine not only works but is safe. Here at the University of Michigan, we’re working closely with our Center for Aging to make sure older individuals are very well-represented in our trials. We’ve also partnered with the Michigan Institute for Clinical and Health Research Center for Community Engagement, which is connected to many faith and community leaders across the state.

We explain our safety protocols and what we know and don’t know about our investigational vaccine. We don’t want to overpromise or mislead people. People respect our honesty, and that makes them more likely to consider participating.

What is being done to help ensure minority communities feel safe and included?

A: Minority communities have historically been underrepresented in clinical trials, but they’ve also had bad experiences participating in medical research—two infamous examples being the Tuskegee study and the case of Henrietta Lacks.

So it’s understandable that people may be suspicious of clinical trials. We’ve found that the best way to help address this is to be as transparent as possible.

We explain our safety protocols and what we know and don’t know about our investigational vaccine. We don’t want to overpromise or mislead people. We stress that we’re particularly interested in recruiting Black and Latinx subjects because they appear to be disproportionately affected by COVID-19.

People respect our honesty, and that makes them more likely to consider participating.

What about clinical trial participants over the age of 60?

A: We’ve found this group to be very, very motivated. We have a number of geriatricians as part of our co-investigator team, and their patients frequently reach out to them to ask if there’s a vaccine trial they can participate in. These seniors are doing it partly for themselves, as they know they’re at higher risk for complications, but they’re also doing it for their own kids and grandkids as a way to help get us all back to some semblance of normal life.

Right now, we’re only allowing people over the age of 65 who have controlled co-morbidities into the study. This means that while they may have a pre-existing condition, such as high blood pressure or type 2 diabetes, they have it well under control with lifestyle and medications.

We’re not allowing the most vulnerable older adults—those in nursing homes, those quite ill with such diseases as Parkinson’s or Alzheimer’s or those who are immunocompromised—to be part of our initial vaccine trials. We will include them down the road if the data support moving to the next step of the trial.

I’ve been impressed with the ENSEMBLE team‘s commitment to these individuals, ensuring that seniors have help participating in the trial. For example, we are providing reimbursement for transportation for study participants, including seniors. This is key, as many seniors find themselves disenfranchised from clinical trials because they aren’t able to get transportation.

It’s important to provide every resource possible to enable as diverse a population as possible to participate, from an age, race and socioeconomic perspective.

At what stage of clinical trials are children typically involved?

A: During the very early phases of vaccine clinical trials, the focus is on healthy adults without underlying medical issues. As we get into the later stages, we expand to healthy older adults and those with well-controlled medical conditions. 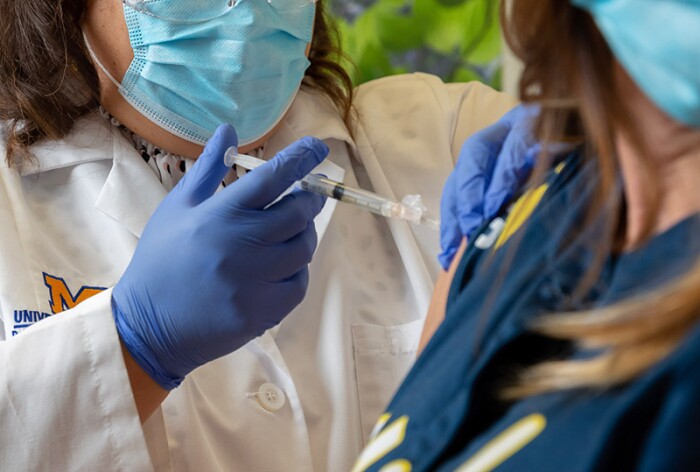 Once we’ve tested the investigational vaccine in these groups and have data that support moving to the next demographic, we study it in vulnerable populations: those who are immunocompromised and children, beginning with adolescents, then moving to younger age groups.

While it’s true that the pediatric population isn’t as vulnerable in terms of acquiring or dying of COVID-19, they are more vulnerable in the sense that they can’t consent to participate in clinical trials for themselves.

What additional safety measures are being taken during the pandemic?

A: We are strict about social distancing, mask wearing and overall cleanliness. We have two locations where studies are being carried out and everyone—participants and staff—is required to wear a mask the entire time they are on site.

To prevent over-crowding, we will stagger visits and make sure participants are kept at least six feet away from others. We also routinely disinfect exam rooms between participants.

Our responsibility to participants doesn’t end when we give them the investigational vaccine either. We have an online app that we will have them use to screen for COVID-19-like symptoms. We want to identify patients who develop COVID-19 as soon as possible so that we can follow them closely and, if they become seriously ill, quickly get them the medical care they need.

What’s the most surprising thing people might not know about how a vaccine clinical trial works?

A: People assume vaccine clinical trials are just about coming in to get an injection. They don’t realize how connected participants get to the clinical research team and how invested the group is in making sure participants stay healthy.

The relationship the research team develops with participants is very special because they see each other repeatedly over two years. There’s a special bond, because both staff and participants know that they are collectively doing something to help other people.

What’s the most rewarding thing about leading a clinical trial?

A: It’s amazing to realize that our participation in clinical trials can contribute to the development of a treatment that has the potential to change a person’s quality of life.

The COVID-19 pandemic has so profoundly altered our lives, and this trial hits particularly close to home because I know I’m fighting for my loved ones, my colleagues and my patients.

As medical providers, we all personally know colleagues who work the front lines and have contracted COVID-19. Some have become seriously ill, and some have even died. It’s empowering to know that I’m on the forefront of potentially finding a way to end this pandemic.