Originally published on jnj.com. Johnson & Johnson is a DiversityInc Hall of Fame company.

For Women’s History Month, we’re spotlighting three of the company’s pioneering early female scientists—and their modern-day counterparts, who are not only innovating in the lab but also paving the way for the next generation of powerhouse women.

At the turn of the 20th century, most women didn’t work outside of the home. So it was a bold move when Johnson & Johnson’s Chief Scientific Officer at the time, Fred Kilmer, hired the company’s first female scientist, Edith von Kuster, in 1908.

“Back then, there wasn’t an awareness of the importance of diversity and inclusivity as we understand it today,” says the company’s Chief Historian, Margaret Gurowitz. “But Johnson & Johnson was different. The company had a strong commitment to hiring women from the beginning. If you could do a job at Johnson & Johnson, it was yours. If you were female and could do that job, great.”

In fact, eight of the company’s first 14 employees were women. And by 1908, women led a quarter of Johnson & Johnson’s departments.

In honor of Women’s History Month and International Women’s Day, we asked Gurowitz to tell us more about von Kuster and two other trailblazing female scientists at Johnson & Johnson—and also asked their modern-day equivalents what it’s like to be a scientist at the company today. 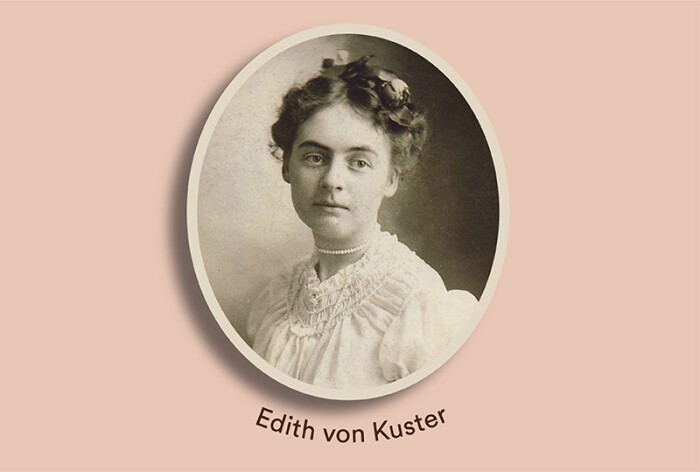 When Edith von Kuster began her freshman year at the University of Minnesota in 1902, less than 3% of women attended college—and even fewer pursued a career in science. Von Kuster was drawn to chemistry and ultimately became an instructor in general chemistry at the university in 1907.

In 1908, Johnson & Johnson hired her as a staff scientist, requiring von Kuster to travel by railroad halfway across the country from Minnesota to company headquarters in New Brunswick, New Jersey—quite an adventurous move for that era.

“Fred Kilmer reached out to her and recruited her to Johnson & Johnson,” Gurowitz says. “We also know Mr. Kilmer was an early advocate for women pursuing the profession of pharmacy science.”

Von Kuster worked in a small department of scientists who conducted research, published a journal called Red Cross Notes, and oversaw the testing of raw materials and finished products. She also joined the Laurel Club, an organization founded in 1907 by female employees to foster professional development and community service.

“Edith was truly a pioneer at a time when there were very few opportunities for women in science,” Gurowitz adds.

Being able to handle a lot of things at the same time is something I learned while juggling my work and personal life, including raising two kids, over the course of the last 15 years. It makes me proud to say that being a female scientist is less and less an exception. 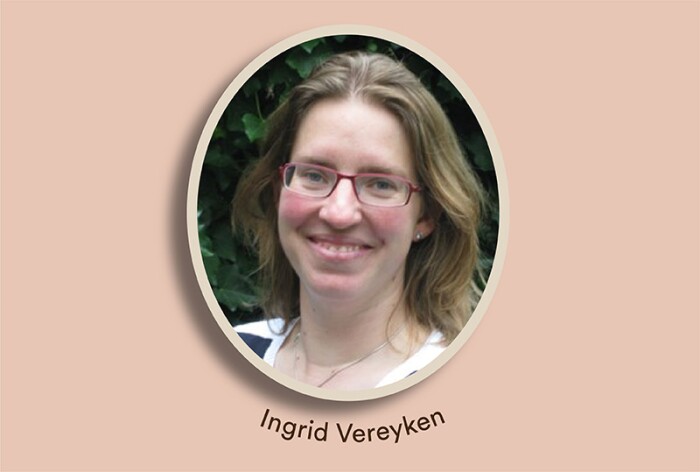 There are a multitude of puzzle pieces—product development, production and manufacturing, preparing documents to submit to regulatory bodies for review—that have to come together to create new vaccines. Ingrid Vereyken is the lead who oversees multiple teams handling many of those moving parts.

“My team at the Janssen Pharmaceutical Companies of Johnson & Johnson is responsible for developing and manufacturing the vaccines that go into vials, first for clinical trials, and later for commercial use,” she says. “We’ve worked on everything from a potential Zika vaccine to a potential universal flu vaccine.”

She chalks up her ability to wear so many hats to being a working mom—in addition to her naturally results-oriented personality.

“Being able to handle a lot of things at the same time is something I learned while juggling my work and personal life, including raising two kids, over the course of the last 15 years,” she explains. “It makes me proud to say that being a female scientist is less and less an exception.”

And just as a good work-life balance has helped Vereyken thrive in her job, she advises other young women pursuing a career in science to shoot for the same.

“I always tell other women to feel good about the decisions they make when it comes to their work and private lives,” she says. “If you feel you are making the right decisions, you’ll be better able to withstand the pressure both at work and at home. If you start doubting yourself too much, it will make things harder.” 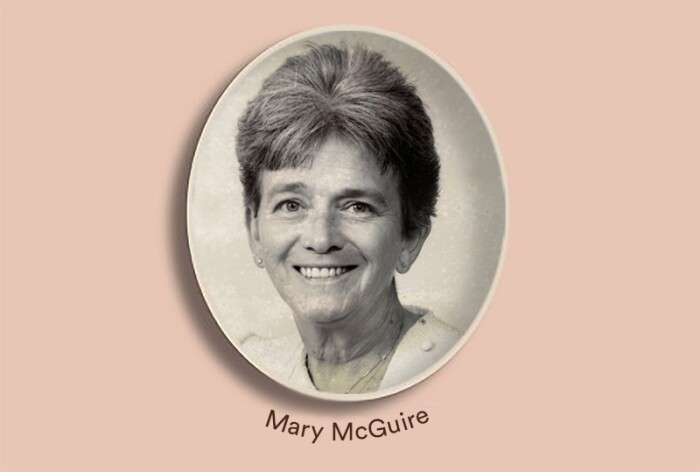 In the early 1950s, Mary McGuire was in college studying to become a doctor, when family needs prompted her to leave school and start working as a research technician in the Personal Products division of Johnson & Johnson, which was focused on women’s health.

Within her first few years on the job, McGuire created patents and had a team of lab technicians reporting to her. In 1973, she became the first woman in company history to earn the prestigious internal award, the Johnson Medal, for the commercial success of her contributions to the creation of Stayfree®, the first belt-less sanitary pad that revolutionized female personal hygiene around the world.

McGuire transferred from R&D to marketing in the early 1970s, then moved on to work on even more game-changing innovations in the company’s baby products business in the 1980s, including evaluating whether Johnson & Johnson should re-enter the disposable diaper business, which it had pioneered in 1904. After 37 years at Johnson & Johnson, she retired as Vice President of Marketing.

Throughout her career, McGuire remained committed to helping other women at the company succeed, serving as a mentor and as a key member of then-CEO General Robert Wood Johnson’s Women’s Committee, a group dedicated to integrating women more fully into the workplace and incorporating their point of view in business growth and development.

“McGuire was a trailblazer in so many ways,” Gurowitz says. “Her career path from scientist to VP helped pave the way for other promising female employees, as did her role in overseeing the development of those who reported to her, several of whom became leaders at Johnson & Johnson.”

Never stop believing that you can achieve anything you set your mind to. Science is not easy, and there will be failures along the way—but don’t forget to learn from them. 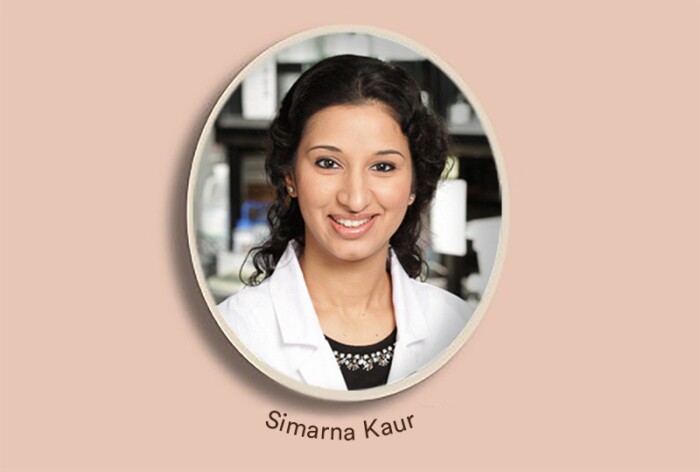 In her role at Johnson & Johnson Consumer Health, Simarna Kaur, Ph.D., leads the team that works on the Ageless Platform, which involves research into the way that skin ages; Biodelivery, which focuses on delivering active ingredients effectively; and Skin-Tech, which encompasses the company’s digital tools for skin health. In a nutshell, Kaur is tasked with bringing “new science, technologies and innovation to the company’s consumer skin health product pipeline,” she says.

For example, she has worked on multiple technologies featured in company products, including the signature soothing CottonTouch™ ingredient used in the Johnson’s® CottonTouch™ baby bath line, as well as the Blackberry Complex—which nourishes the skin and helps reduce visible signs of aging—found in Aveeno’s Absolutely Ageless line.

Focusing her research on the body’s largest organ wasn’t always part of her career plan. In high school and college, Kaur wanted to pursue medicine and become a physician. But after doing an undergraduate research project on cell biology, she realized that she had a passion for science—and decided to pursue a Ph.D., instead.

The fact that she never thought of a Ph.D. as off-limits reflects her belief that, as she explains, “every scientist, regardless of their gender, brings unique strengths, insights, vision and problem-solving capabilities, based on their experiences.”

According to a report from the McKinsey Global Institute, careers in science, technology, engineering and mathematics (STEM) are expected to see a spike in the next decade. But a gender gap—fueled by implicit stereotypes—persist. Kaur, however, is undaunted.

“Motivated scientists should be recognized and celebrated,” she says. “Following in the footsteps of women in STEM who paved the way for me to become a female scientist, I hope to lead by example, showing that dedication, hard work and passion do get recognized.”

Her advice to young women interested in becoming a research scientist? “Never stop believing that you can achieve anything you set your mind to,” she says. “Science is not easy, and there will be failures along the way—but don’t forget to learn from them.” 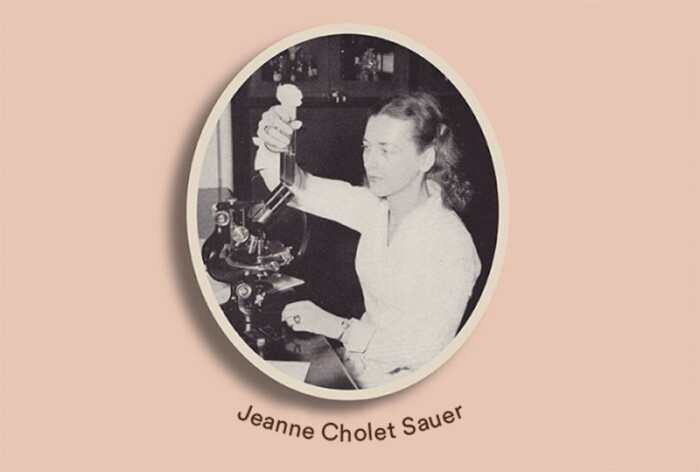 When Jeanne Cholet Sauer became the supervisor of the Technical Services Laboratory at Johnson & Johnson in 1944, World War II was still raging, and women were stepping in to help fill a lot of jobs that had previously been performed by men across many industries.

But at Johnson & Johnson, female employees weren’t just fill-ins for men on the front lines—many were full-time scientists like Cholet Sauer, who was responsible for research, distillation experiments and other duties in the areas of ingredient and raw materials testing, and quality and safety evaluations, says Gurowitz.

“Cholet Sauer was in charge of an incredibly important lab. She was a bacteriologist, so it’s likely her lab engaged in the bacteriological evaluation of products and formulations,” Gurowitz adds. “The fact that she wasn’t the only woman in the department at that time—and that she was a supervisor—shows Johnson & Johnson’s long-term commitment to women in sciences.”

There are so many great female leaders at this company who inspire me. As a project lead, I hope to inspire others as well. I love being the glue that holds my team together, to help us work efficiently and effectively as we push to create something remarkable. 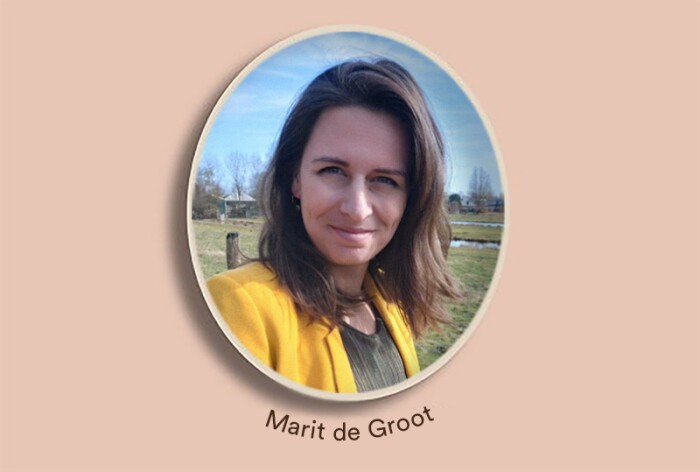 In order to understand a vaccine candidate’s efficacy, a team of scientists is charged with looking at the immune response that an investigational vaccine provokes by testing for antibodies and other immune markers in blood samples taken from all of the participants in clinical trials.

As the Project Lead in the Department of Clinical Immunology, Marit de Groot is in charge of the team of scientists doing that type of immune response assessment for potential Janssen vaccines.

De Groot oversees all activities in the lab and has worked on multiple Janssen vaccines, including the one for Ebola.

“My job involves aligning teams and providing clear communication on planning, proposals and decisions,” de Groot says. “For example, I often ask things like, ‘Do my colleagues in the labs have everything they need? What documentation is required to ship samples from a specific country to a specific lab? And most importantly, does everyone know what is expected and feel included and appreciated?’ ”

It’s a role de Groot finds thrilling, and one her prior work as project lead on the company’s Ebola vaccine program prepared her for in many respects. “Working on emergency healthcare programs—where the eyes of the world are on us—really motivates me,” she says.

So does the fact that she is surrounded by impressive women scientists.

“There are so many great female leaders at this company who inspire me,” de Groot says. “As a project lead, I hope to inspire others as well. I love being the glue that holds my team together, to help us work efficiently and effectively as we push to create something remarkable.”

As for finding one’s passion, de Groot emphasizes the importance of looking at one’s personal life for clues. “Look at your hobbies and notice who you are in a setting outside of work. Ask yourself what your strengths are, and see how they could apply at work. How do you harmonize with people? Bring this all to the table.”